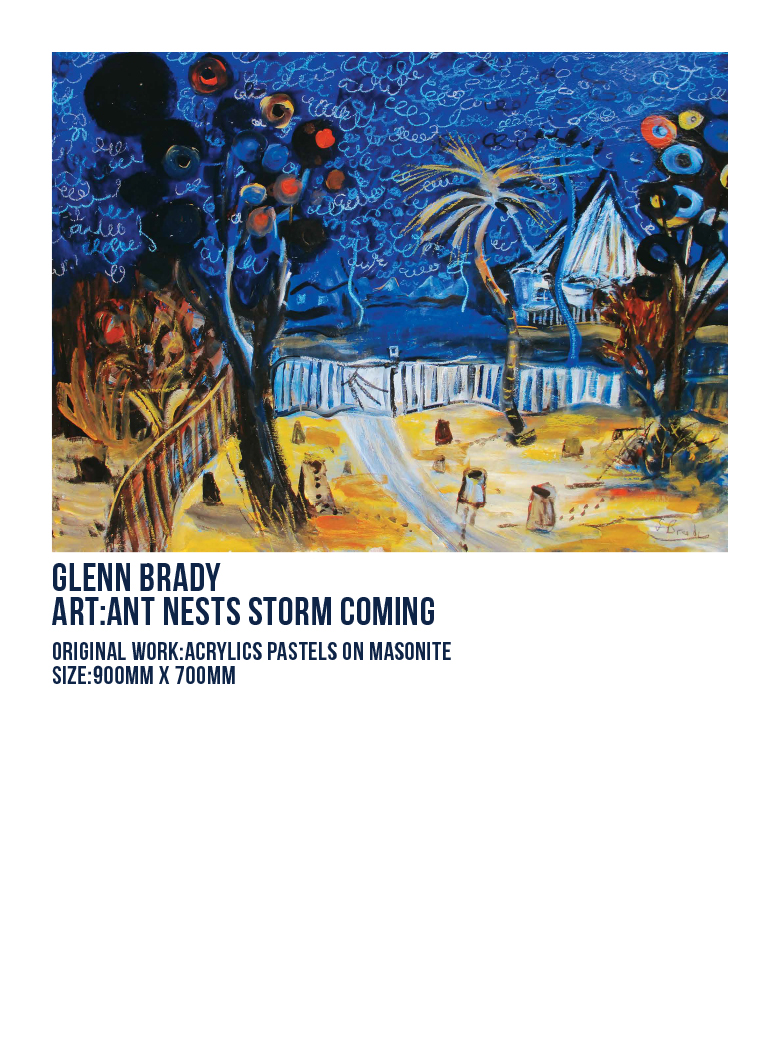 Born in Brisbane in 1966, Glenn grew ‘up’ at Geebung, a half post-war suburb, half rather large industrial estate with three churches, an RSL and several shops. He says it was a place where you made your own fun.

Glenn left school at 15, and home at 16 and fell into the emerging Brisbane punk scene where much fun was had, despite the violence and “slightly mental” police force that oversaw the whole city and didn’t mind smashing your door or teeth in without any reason. He played in bands and still does.

Glenn says he paid the price for alcohol and pill intake on a pirate level when the 90s hit, falling into a new world of depression, anxiety, psychiatric wards, medication and shock treatment – a cycle that continued for 13 years and his memory is damaged from it.

But he kept painting…always telling himself he had to stay alive to keep his vision of painting the place where he was born and raised – ugly, generic and strange as it was. But there is still colour and life happening there…

He started exhibiting in 1993 at the newly opened Zoo venue, Rics café, and then through Mental Health Awareness Week, which he took part in every year for seven years. After that, he exhibited in Brisbane 20 times, as well as Melbourne, Sydney and once in the USA.

“Even after 28 years of painting and around 30 solo shows I’m not part of the ‘big gallery art scene’ and the movement of art as  currency, which is just fine and dandy with me,” he says.

“It seems a lot of people are looking for the glory and novelty of being an artist, but not seeing what is front of their own noses…life, and life’s not a novelty act…its dark and sad, cruel, violent, beautiful, soft, loud and crazy. At times i actually enjoy it.”

He’s been refused entry into art college twice and in the beginning, expected nothing from painting and says he would have been quite content to sit every day in a park and drink himself stupid.

“So anything now is a bonus,” he says.

SubmissionAnt Nests Storm ComingSubmissionBackyard Wattle TreeSubmissionRoundaboutEmailglennbradyart1966@gmail.comContact the artistTo purchase artworks or to discuss a new commission etc, please message me via these contact details.Share
If you enjoyed the art & the exhibition please consider a small donation to support young Australian artists.
SUPPORT THE ART